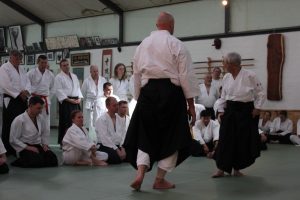 Study of the shinkage ryu documents reveals that “moon on the water principle” applies to more than just the movement of the front foot, undetected into the space that the attacker wishes to occupy, but rather to the nature of mind itself.

If an attacker has the intent to do something (strike, grab, both) their mind is filled with intent, and this intent manifests in the action the attacker takes. At this moment the attackers mind is trapped at the point of manifestation.

It is important to learn to move the body in a way that leaves this manifestation of intent undisturbed. In essence for our movement to remain invisible to the attacker, because let’s face it, reality is if you can feel it, you can resist it. “Feel where they are and be where they are not”- has been my motto on the mat for a very long time now.

One must identify this point in both space and time, and move accordingly.

On a more physical level, moon shadow foot is intent, using the centreline as an atemi, one enters completely, engaging the attacker rather than avoiding the altercation. This subtle movement is the final physical representation of the mind, Ki, body sequence. This step initiates balanced forward movement by drawing down through the sole of the foot, rather than launching the body forward from the rear foot, unbalancing the structure, spilling the tanden ball and toppling the centre pole.

Imagine you are walking down a steep incline, and you trip over. In front of you is a tree with a branch extended, you reach out with this extended hand, and MENTALLY prepare yourself to accept its resistance and arrest your fall, this tree is unmoved and the branch represents a mentally predetermined point in space and time at which resistance is EXPECTED to occur. Now imagine what happens when the branch snaps and no resistance is felt.

When someone attacks you they mentally prepare to meet resistance, they predetermine this point of contact in space and time, if our initial movement is avoidance, the mind connection is broken, and a new cognitive sequence is started, this sequence can occur multiple times in the attacker’s mind during a single attack. This keeps us retreating, and creates a sequence of attack and counterattack that can go on forever.

Occupying the line with moon shadow foot changes this sequence to a single entity, what Sensei describes as now, here and nowhere. Mentally we are talking about the pre-cognitive function of the mind. Although scientists cannot yet agree on an exact time frame, the mind pre-loads sequences from between 3 to 6 seconds ahead of actual time.

A great example of this is imagine it is a dark night and you are walking along an unfamiliar track carrying a torch, where do you shine the torch, at your feet, or off into the distance. If the torch is shone at the feet, progress is very slow, as the brain deals with obstacles in a closed loop of about one second between the eyes and the feet, the movement becomes totally reactive, not proactive. Now walk as you normally would, shining the torch off into the distance. Normal walking cadence is now restored, and although you cannot see the feet and where they are stepping with the eyes, the minds eye knows where the feet are and what they are doing. This is Pre-cog, and moon shadow uses it as a tool against the attacker. 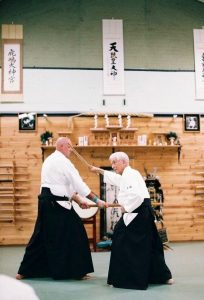 This brings us to lizard legs or “T” step, as Sensei now calls it.

The root of all physical power is our connection to the ground, the soles of the feet, it is our feet that generate our physical relationship to the force of gravity, and our physical body cannot escape this principle, generating power by either pushing against gravity, or dropping down under the force of gravity. It’s critical to constantly remember that the solidity of the ground is the basis of all upward forces and that the weight of gravity is primary base of all downward forces.
All physical movements are just a subtle manipulation of these important relationships.

To maintain correct grounding the body needs to be able to move with speed and agility without compromising its structure. To understand this, one must not compromise the centre pole/central axis, which, connected with the sole of the foot, produces relaxed dynamic powerful integrity.

As stated earlier, moving in a conventional athletic way, launching the body forward from the back foot spills the tanden ball and upsets the stability of the centre pole. This stability is important in Aikido as the centre pole represents the axis for rotation in circular movements. Maintaining it is integral to developing centripetal and centrifugal forces, and the manipulation of these forces during motion.

“T” step allows rapid forward movement by drawing down into the ground to maintain connection and alignment throughout the structure. Done in unison with moon shadow foot, it allows the body to prepare for rapid and dynamic forward or backward movement totally relaxed and free from the desire or will to “do something to the other person” , it allows us to start all technique by understanding that, in truth we aren’t moving some one else, but rather just moving ourselves, unattached through space and time.

Recently Sensei has introduced one line training to emphasise this principle and allow us further study of structure, grounding and its relationship to balanced dynamic movement.

Remember there is nothing outside the basics. 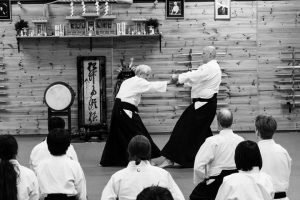 Human Endeavour and PurposeControl the Self
Scroll to top